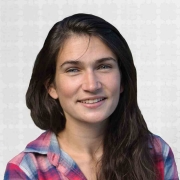 Rebecca supports a Department of Defense client who has been very supportive of her interest in growing her data science skills. She’s a great example of someone with technical skills who can also communicate well. She’s not afraid to show how much she loves her work, and that enthusiasm, she says, can be a huge asset.

When I tell people I’m a data scientist, it usually leads to follow-up questions. Data science is a pretty broad term and means a lot of different things to a lot of different people. Currently, I work with the Department of Defense on counterintelligence efforts. As the only data scientist on the project, I get to work with military veterans and government officials to find new ways of applying technology and machine learning to help solve the problems they’ve devoted their careers to. I was nervous to start because there are a lot of people at Booz Allen and elsewhere in the data science industry who are more knowledgeable about hard-core stats and computer science, but it’s been a really good fit for me.

Once I got acclimated, I realized they didn’t need a PhD, they needed someone who understood the national security domain and could identify problems to solve, progressing in incremental steps that made their jobs easier along the way. I was actually a physics major, so most of my internships were working in labs. I spent a lot of time around brilliant researchers working on incredibly difficult physics problems, but I missed the opportunity to use my oral and written communication skills, and I felt disconnected from the applications of my work. I did a double major in political science, which helped to keep me well-rounded. After several years of lab work, I wanted to try something different and ended up interning at the State Department working on space, cyber, and nuclear policy.

It was exciting to be one of the only STEM people in the office and be able to apply my background to challenging national security policy questions. I really enjoyed it, and it felt like the optimal use of my different skill sets. That’s also one of the things that’s great about Booz Allen—you can find people who excel in a variety of fields, and there are lots of people with different kinds of intelligence working together on the same problems. The advice that I like to give to people like me coming up in their careers is that you’ve got to develop your own measuring stick for your success, rather than assessing yourself against someone else’s metric. There's always going to be someone who's smarter or better in one particular area, but there's never going to be someone who has your exact skill set, who’s exactly like you.

That’s what makes you valuable. And don’t be afraid to be excited about things! As a young person and as a woman, being able to demonstrate what I care about—I’ve found it really helps to get you noticed and taken seriously.

Scientists like Rebecca partner with clients across all industries to provide services and solutions that enable them to do their job better. Join our team by searching current openings below.