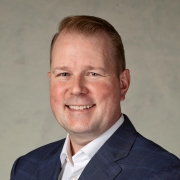 Joel Dillon is a leader in Booz Allen’s global defense business driving next-generation technologies through the firm’s Digital Battlespace business. He and his teams focus on building advanced solutions and delivering quality results and innovation to clients across the Department of Defense and beyond.

Prior to joining Booz Allen, Joel was a senior technical product manager for Amazon Web Services (AWS). There he partnered with the intelligence community to oversee the launch and operation of the world’s first cloud-computing region capable of handling workloads at the U.S. Government’s Secret classification level.

Before joining AWS, Joel served in the U.S. Army for more than 20 years as an airborne and ranger-qualified infantry and acquisition officer. Among his many achievements, Joel spearheaded the development, testing, and fielding of multiple life-saving products for service members, including specialized body armor for female soldiers which TIME Magazine named one of 2012’s Best Inventions of the Year. As a result of this and other work, Joel and his team received the Army Acquisition Excellence Award for Equipping and Sustaining Our Soldiers’ Systems.

Prior to retiring from the Army, Joel led special deep-future science and technology research and development programs for the Deputy Assistant Secretary of the Army for Research and Technology and the Army Chief Scientist. He and his team were awarded the Army’s Dr. Wilber B. Payne Award for Excellence in Analysis for their deep future warfighting analytics work.

During his distinguished military career where he deployed to both Iraq and Afghanistan, Joel earned many awards including the Legion of Merit and the Bronze Star Medal with Valor Device and Oak Leaf Cluster. He was also honored with the Order of Saint Maurice and the Army’s prestigious General Douglas MacArthur Leadership Award for his service as an infantry commander during ground combat.