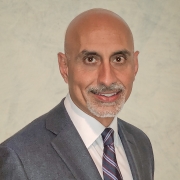 Regardless of what you do in life, you should have a deeply rooted passion for that endeavor. For me, that passion is national security. My team’s job is to not only safeguard innovation but also maintain the confidence and pride of the American people. Every day, we appreciate this unique opportunity to partner with clients while serving the good of the nation.

After Carl retired from the Federal Bureau of Investigation (FBI) in July 2018, he led the U.S. government and public sector cyber practice as a managing director at Ernst & Young. In this role, he and his teams developed strategic plans to address ongoing cyber risk and to meet regulatory and compliance requirements. In more than 20 years at the FBI, Carl was deeply involved in directing the agency’s efforts in counterterrorism, counterintelligence, and weapons of mass destruction.

Carl earned a B.A. from Duke University and a Juris Doctor from Washington University in St. Louis.

Why are you passionate about national security? The work we do for our clients impacts their mission, but more importantly, it directly affects the national security of the United States. Our teams, in partnership with our clients, serve to protect the American people. I’m passionate about this calling, and I like to think that it spreads to our teams. We have a chance to serve our clients, our communities, and our nation.

What are the three greatest challenges facing cybersecurity? Our clients are grappling with technological challenges that transform how they pursue their mission, but they also can let serious risks into their organizations. Our clients need a trusted partner to aid them in developing innovative strategies to navigate the benefits and risks they’ll confront in the next decade.

How do you inspire your teams to do excellent work? How do your teams inspire you? Teams are inspired when they understand how their participation drives the vision of an organization. As a leader, my job is to ensure the freedom to innovate in support of that vision. Once we’re confident and comfortable with each other, we know we can achieve anything and share our success.