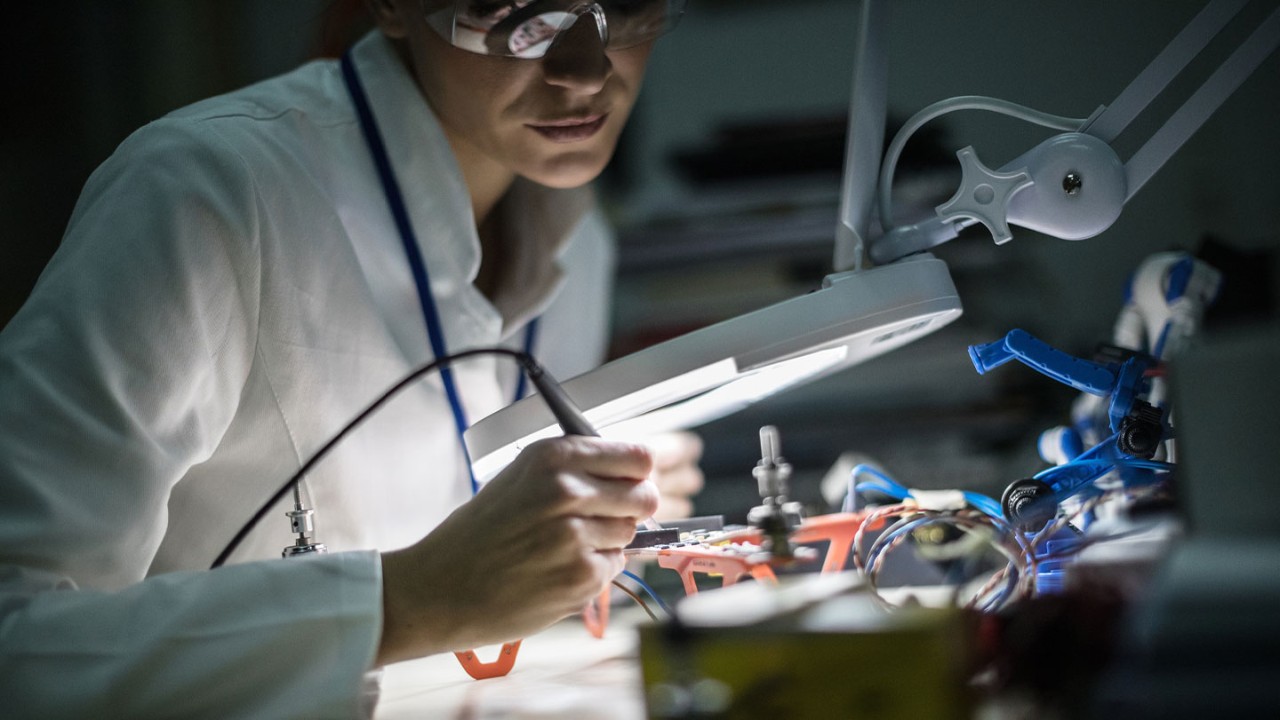 Where can a STEM career take you? Senior Vice President Cedric Sims and two of his Booz Allen colleagues shared their experiences—and showed robots in action—in a January episode of “Cool Jobs.” It's an online program by FIRST Chesapeake to introduce middle and high school students in the District of Columbia, Maryland, and Virginia to people working in technology and potential career paths.

Mechanical Engineer Senior Consultant Annaliese Cunniffe talked about her robotics work at Booz Allen supporting various Army and Air Force clients. In one project, for example, she’s investigating ways to get different payloads on and off a robot quickly. “This is great for use cases in the military where they might have to go to a new mission at any minute,” she said.

“Initially I thought that being an engineer meant I would be designing bridges and things like that,” Cunniffe said. “But through my coursework, I was able to see how broad the field actually is.”

Lead Robotics Engineer Chantal Murdock, a self-professed “kid who loved science but hated math,” related her robotics journey and what keeps her on this career path.

“What I really like about working with robotics is that you get the best of both worlds. Sometimes I might be at my desk, sometimes I might be in the lab working on a robot, or when we do build tests, I might actually be out in the field,” she said.

“I have been in the woods, and I have been in the sea,” Murdock said of her experiences testing robots and self-driving vehicles. “How many jobs do you know where you get to play with jet skis and get paid for it?”

Booz Allen’s involvement with FIRST Chesapeake is long-standing and multifaceted, involving philanthropic investments, board participation, and more. For example, the firm offers grants to any employee who requests one for their local robotics team and has launched an alumni ambassador program that has become a model for other regions.

“Booz Allen Hamilton has played an integral role in helping us do what we do best, build tomorrow’s technology leaders. Together, using the robot as the vehicle,  we have positively impacted thousands of middle and high school students in the District of Columbia, Maryland, and Virginia,” said FIRST Chesapeake Executive Director, Leighann Scott Boland.

Another highlight has been skills-based volunteer activities such as mentoring robotics teams. Sims himself has been a FIRST Chesapeake mentor. On the “Cool Jobs” broadcast, he talked about some of the career experiences he brings to these relationships, from working on early-stage autonomous vehicles to using his engineering background in Booz Allen’s support of large-scale federal programs.

“There are big investments happening within the federal government, very complex programs with very complex interactions between data and systems that really affect the ability to achieve national security.” At Booz Allen, he said, “We’re using our engineering prowess and talent to solve some really, really difficult problems.”

Before the pandemic, Booz Allen volunteers spent many Saturdays working with FIRST Chesapeake teams in person on robotic projects. During COVID, these efforts pivoted to supporting virtual engagements and intensified, with a focus on diverse students from underserved schools. The aim is to build a more diverse STEM pipeline in the region.

In October 2021, Booz Allen supported funding for 15 students from DC’s Francis L. Cardozo Education Campus to participate in FIRST Chesapeake’s GEARED Up program. It provides students with parts and online lessons for assembling their own robots. “Thank you for igniting my passion for engineering,” said one Cardoza GEARED Up participant's rave review.

Learn more about FIRST Chesapeake, diversity, equity, and inclusion at Booz Allen, and our community impact and philanthropy.