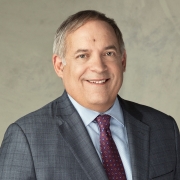 I’m proud of the work we do at Booz Allen. In an era of tight budgets and stretched resources, my team helps ensure the U.S Army is equipped with the capabilities it needs to defend against rising global threats.

In fact, we’re responsible for the Global Threat Mitigation Program, the largest contract ever awarded to Booz Allen to date. But while I’m proud of that, my driving passion is to continue serving warfighters. The work we do with soldiers across the Army helps them operate in a dangerous environment.

Jay is an instructor for the firm’s Change Management Advanced Practitioners Program, a joint venture with Booz Allen and Georgetown University’s McDonough School of Business.

Jay served as an Army officer for 24 years, rising to the rank of Colonel. He was an infantry officer with a secondary career field in resource management that culminated with service as a separated infantry brigade commander followed by becoming a division chief in J8 (resource management), the Joint Staff. After his military career, prior to joining Booz Allen in 2002, Jay joined Arthur Andersen where he was a senior manager in its government practice.

He holds graduate degrees from Syracuse University and the Industrial College of the Armed Forces (ICAF) in business and resource management, and he has an undergraduate degree in general studies from the U.S. Military Academy.

What do you do at Booz Allen? I’m a vice president in the Army account. Primary responsibilities include: Headquarters/OPS, Army Operational Forces, Human Capital, and IMCOM. It’s a large scope, as you can imagine.

What big challenges are your clients are facing? In the Army, there’s been a major downsizing over the last 20 years. When we did Desert Storm in 1990, there were 725,000 active duty Soldiers. Today there are about 450,000. So what happened is, the Army lost a lot of its capability to train itself. When I was in the Army, I never saw a contractor in training. Today we are part of it. I’ve got staff at virtually every Army installation where there are Soldiers training. We are providing a lot of expertise on planning and preparing units to deploy.

What do you find most meaningful about what you are doing? It has an impact. The work we do with soldiers across the Army is helping them so when they deploy, they have a good chance to operate in a dangerous environment and live and come home.

What has kept you at Booz Allen? The values, the people, the philosophy. I appreciate the opportunity to do work that I feel is meaningful and really makes a difference. I’ve been able to do that the whole time I’ve been at Booz Allen. I work with great people. I get up every day and look forward to going to work. I don’t come to work every day to make money. I come to work to make a difference. We operate with high values, and that has kept me here.

What has been your life’s biggest challenge? Having a good balance between work and family and life outside of work. My wife would tell you that the balance is too much toward work, but it’s because I care so much about what I’m doing, and I like what I’m doing, that I spend a lot of time at work. But I love my wife, and my family is really important to me.

What is something people might not know about you? I think at this point the people at Booz Allen probably don’t know the deep operational Army background I have. I worked in the early days with the Rangers and the light infantry. Also, they probably don’t know I’m also a certified public accountant (CPA).

What is your most prized possession? A watch I bought when I graduated from West Point. It’s a Rolex. A GMT Master. Cost me $260. They don’t make it anymore. It’s got a red and blue bezzle. Since I was 22 years old, that watch has been through life with me. All my experiences, all that I’ve been through, all of my training, all of my experiences in the Army and experiences out of the Army. It’s the one thing that since college has been with me through every experience I’ve had.

How has having been a paratrooper, with deep operational experience, helped make you who you are today? In the Army, it’s about people, about the soldiers. From the time I was commissioned in 1975, I banded with soldiers. From being a platoon leader in Korea and the Rangers to company command, battalion command, and brigade command, it’s always been with soldiers. I learned early on you can’t do anything without the people you’re working with.