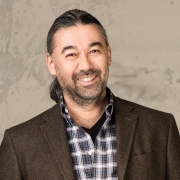 Haluk Saker is a modern software architecture and technology leader. He has been with Booz Allen for more than 20 years and is co-author of the Enterprise DevOps Playbook. Haluk is responsible for the design, development, deployment, and operations of cloud-native applications. His primary role is building high-end web/cloud solutions, such as Recreation.gov, establishing high-end software engineering teams, and expanding our system development footprint.

Prior to joining Booz Allen, Haluk was one of the founders of an uninterruptible power supply startup in Istanbul. He also owned a restaurant, specializing in European cuisine. Additionally, Haluk worked for various hardware and software companies in Turkey, primarily as a software engineer delivering solutions to federal and commercial organizations.

“Never stop learning, never stop reading. This helps keep me sharp… so I can show up as the expert, even when I'm talking to people who may very well know more than me.”

How did you get involved in software engineering? I’m originally from Turkey where I studied electrical engineering and engineering management. I worked as a technical team leader for 2 years with one of the leading uninterruptible power supply manufacturers in Turkey, and 3 years as a sales support engineer. After that, I came to the University of Texas, Dallas, as a research assistant while pursuing my master's in management information systems. There, I learned a programming language called Cool:Gen, which was the primary software development language at many federal agencies. At the time, there were only a few experts in the world with this language, so Booz Allen hired me in 1997 to work as an application/software developer.

What's the coolest project you've worked on at Booz Allen? Recreation.gov is by far the coolest and also the most challenging software development project of my Booz Allen career. Although we kicked the project off in 2017, I started working on the capture about 5 years before the win. When we started working on the capture, no one, even our own team, believed that we would unseat a commercial travel giant and win the job. But we did! The recreation.gov project is awesome for two reasons: First, we use the microservices architecture, cloud technology stacks, resilience engineering, and the highest maturity DevOps automation, similar to startups like Spotify, Uber, Netflix, and Amazon. The second and probably more important reason is, once we are done, it has the potential to touch everyone’s life. People will have a good user experience planning their vacations to visit our nation’s assets, like national parks, forests, lakes, and all of the public lands.

What advice would you offer someone looking to grow their career at Booz Allen? Never stop learning, never stop reading. You need to push yourself to read one book per month. I have a book in my bag, a book in my office, and a book in my car. This helps keep me sharp on new technologies, so I can show up as the expert—even when I’m talking to people who know more than me.