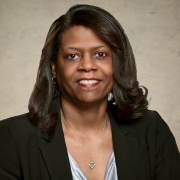 Matice began her career in 1988, serving as the nation’s first African-American, female naval flight officer. She logged thousands of flight hours in both the EC-130 and the E-6 aircraft. After serving in the Navy, she was presidentially appointed to serve as a White House fellow at the Department of Treasury. She returned to government service a few years later as a member of the Senior Executive Service at the Department of Defense.

Matice earned a B.S. in physical sciences and general engineering from the United States Naval Academy. She holds an M.P.A. from Harvard University and an M.B.A. with a finance concentration from Johns Hopkins University.

She currently serves on the United States Naval Academy’s Alumni Association’s Board of Trustees and is a member of the Academy’s Distinguished Graduate Award selection panel.