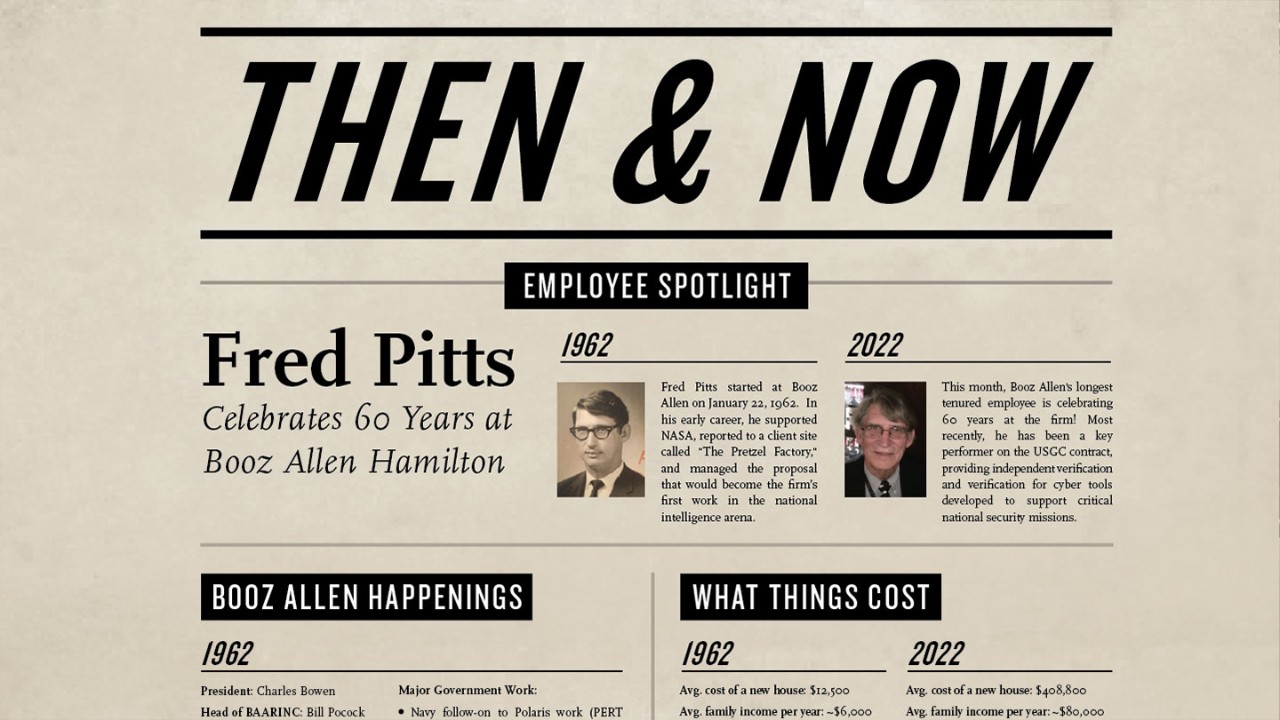 Tech pioneer offers guidance for the next generation

Six years can be considered a long time to stay with the same employer—particularly in technology careers and especially during today’s Great Resignation. Fred Pitts has been with Booz Allen for six decades.

What’s kept him with the firm all this time? How have things changed most over the years? And what wisdom does he have for others at Booz Allen and in tech? Read on for highlights from Pitts’s still-going career.

Navigating the Shift from Designer to Consultant

“Going from physically producing products to giving advice or consulting on clients' problems was quite a change,” he said.

Pitts swiftly adapted. “The work is always changing, but sometimes one can apply lessons learned from one assignment to another or approach a job with a good foundation based on earlier, similar work,” he said. “It is very satisfying to complete a job with a good outcome for the client.”

Changes and Constants at a Growing Firm

Technology was quite different in Pitts’ early years with Booz Allen. COBOL and FORTRAN were the programming languages of the day. Pitts looked up his colleagues’ contact information in printed Blue Books, which he still has dating back to 1962. And his anniversary gift for 20 years with the firm was an Apple II external hard drive.

Yet some things at the firm have remained steadfast. “While the consulting work we do has increased significantly, and at much higher levels in industry and government, the sense of being a member of Booz Allen is still pretty much the same.”

“Booz Allen has always enjoyed a reputation as one of the leading consulting businesses in the U.S., and it's a pleasure to be associated with the firm,” he said. Most recently, he noted, “The firm's response to and handling of the pandemic has demonstrated why the firm has the reputation that it has and significantly made that period manageable.”

Lead engineer Bill Pearson, who has known Pitts since 1978, describes Pitts as “a warm, funny, laid-back manager who was always available.”

“Between our software engineering work at client sites, meetings with senior managers at the Booz Allen’s Bethesda headquarters, playing softball in Potomac Park, and occasional visits to Fred's home... I learned a lot about Fred as a technical engineer, as a project/people manager, and as a person,” Pearson said.

One bit of advice that stood out for Pearson is “Miss it quick!” In other words, he said, “don’t spend a lot of time thinking about the ball or your shot. Just step up, take your best swing, and move on.”

What does Pitts advise for today’s Booz Allen employees, current and prospective? “You can always learn from those you encounter at Booz Allen,” he said. “They have a lot to offer as you find your path in the company, in your own way. Be who you are. All are welcome.”