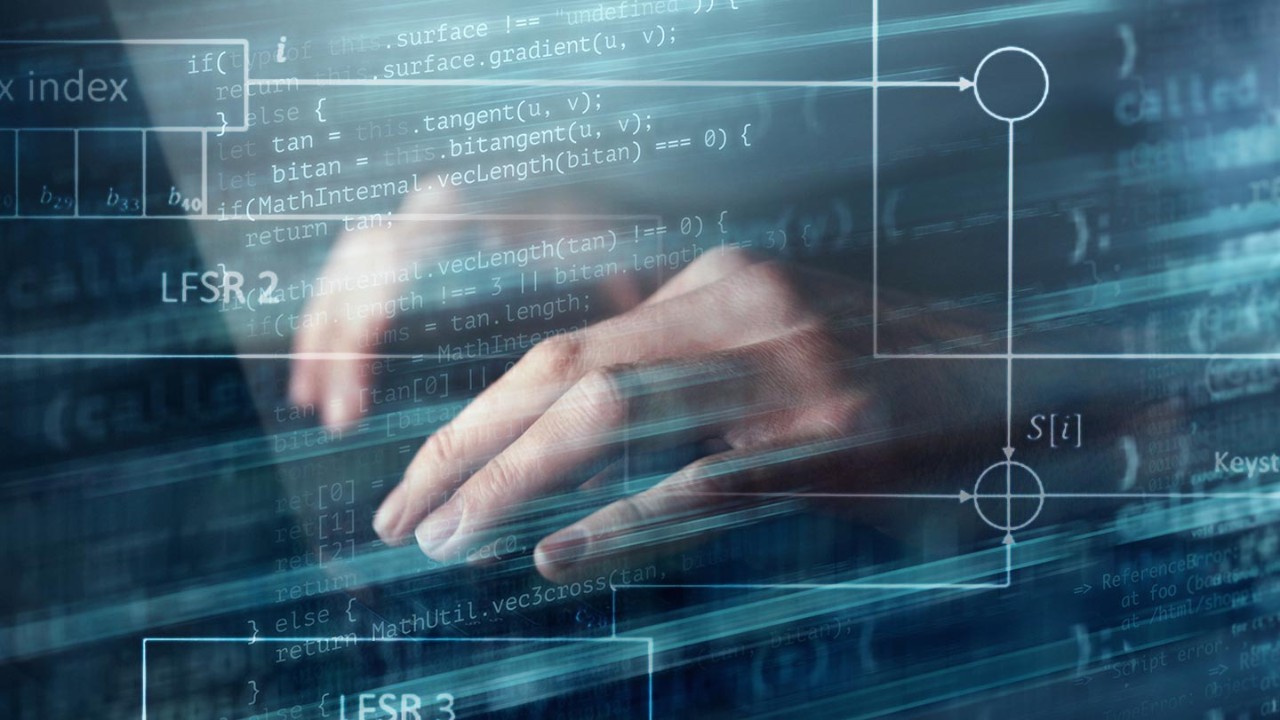 Our research sheds new light on the encryption mechanism found in various Kimsuky malware samples, including those named Gold Dragon and Ghost419 (see Figure 7 at the end of the blog for representative sample hashes). Open-source reporting does not identify or describe the encryption mechanism. As a member of the Booz Allen Adversary Pursuit cell, we believe that this encryption mechanism—which we call the “Kimsuky cipher”—was invented by the malware authors. The mechanism does not match any publicly known cipher. This blog provides a full description, along with a reference implementation.

Researchers from the Booz Allen Adversary Pursuit cell discovered the Kimsuky cipher while compiling reporting on tactics, techniques, and procedures (TTP) used by the Kimsuky group. We reverse-engineered the cipher from binary samples. Our team has found that Kimsuky typically uses this cipher in conjunction with hard-coded keys. Re-implementation of this cipher allows researchers to decrypt Kimsuky network traffic in real time, providing insight into actor’s TTPs, real-time threat intelligence, and incident response assistance.

The Kimsuky cipher uses a 128-bit key and a 32-bit initialization vector (IV), and functions as a stream cipher. First, there is a key expansion step that sets up the internal state of the cipher. Then, the state of the cipher is advanced outputting one bit at a time, which is masked over the plaintext.

The key and IV are first placed into a 288-bit vector that also contains a run of 128 zeros. This vector is depicted in Figure 1, and will be denoted as 𝑉.

Figure 2: The components that make up the internal state of the cipher, their sizes, and variable names used to reference them

The three LFSRs are initialized to zero and then filled from this vector. The LFSRs, their register sizes, and the variable names used to refer to their internal state are listed in Figure 2. These registers get filled from the vector 𝑉 by iteratively placing a single bit into each LFSR, i.e., 𝑎[0]=𝑣[0], 𝑏[0]=𝑣[1], 𝑐[0]=𝑣[2], 𝑎[1]=𝑣[3], etc. The indices of the shift-registers in which the key is placed are taken modulo the shift register size. This effects LFSR 3 where the initial key bits are overwritten. This means that 42 bits of the 128-bit key have no effect on the final output of the cipher.

Figure 3: A depiction of the key expansion process. Three LFSRs are filled from the Key and IV and are each stepped out 10,000 cycles after filling. The S-box is initially filled with an alternating sequence of 0’s and 1’s

After the initial fill, the three LFSRs are stepped out by 10,000 steps. The shift registers, also depicted in Figure 3, are defined by the following polynomials over GF(2): 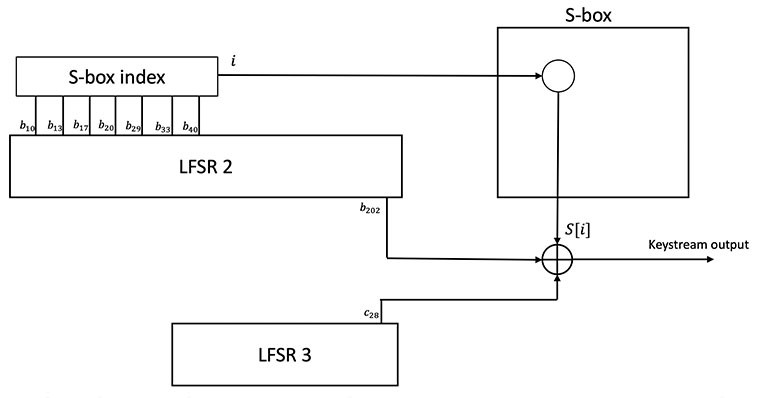 The process for retrieving a bit of keystream during the normal operation of the cipher is depicted in Figure 4. Seven bits are selected out of LFSR 2 and used as an index in the S-box. Specifically, the index selected from the following bits, listed from least significant to most significant order: 𝑏[40], 𝑏[33], 𝑏[29], 𝑏[20], 𝑏[17], 𝑏[13], 𝑏[10]. The S-box entry at this position is then XOR’ed with the bits 𝑏[202] and c[28], from LFSRs 2 and 3, respectively, to form the keystream output.

Figure 5: The S-box update process. Two values from the S-box are swapped. The indices for these values are generated from registers in LFSR2

Following the S-box update, the three shift registers are stepped out once in between keystream outputs. LFSRs 1 and 3 are operate entirely linearly according to the process described during key expansion. Shift register 2 contains a non-linear component that takes input from shift register 1. Note that this input is computed before LFSR1 is advanced. This step is depicted in Figure 5, where symbol  denotes a binary AND, and the symbol  denotes a binary XOR. The non-linear input from LFSR1 can be described by the equation (a[20] a[30])(a[55](a[20]a[30])). 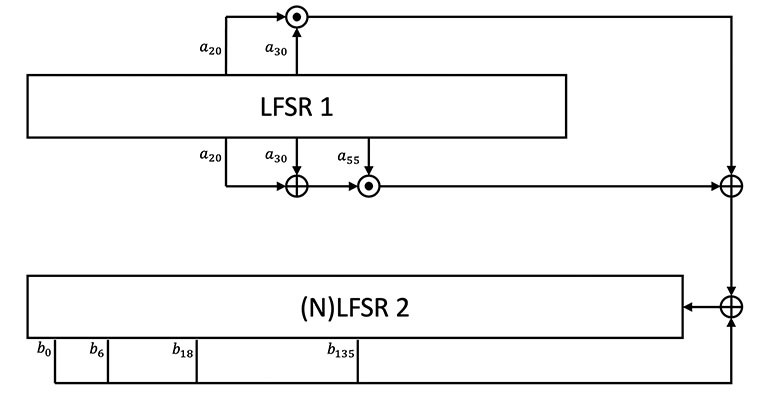 Figure 6: The non-linear update step for LFSR2 used during cipher operation. A non-linear combination of bits from LFSR1 is fed into the input of (the now non-linear) LFSR2

This blog series is brought to you by Booz Allen DarkLabs. Our DarkLabs is an elite team of security researchers, penetration testers, reverse engineers, network analysts, and data scientists, dedicated to stopping cyber attacks before they occur.