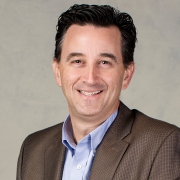 An electrical engineer by trade, Jim Potter's path to Directed Energy began with assignments in the Coast Guard and later at a Coast Guard lab working on radio frequency engineering projects. He has led engineering teams supporting numerous government and commercial clients and now he’s excited by embracing his clients’ missions and the collaboration with the government to help Directed Energy reach its full potential.

What’s excites you about what you’re doing today in Directed Energy? It’s the challenge of the unknown. This isn’t building something that’s already been built, it’s building something for the first time—envisioning, designing, implementing, testing, and then deploying and supporting it.  What’s exciting is the challenge of knowing what needs to get done, but not exactly how it will get done.

You’ve called the team at Dahlgren, Virginia, the hub of Navy Directed Energy arguably the best in the world. Why is that? The team we’ve got—comprised of Booz Allen engineers, scientists, and analysts, working alongside the government’s engineers, scientists, and analysts are the best and most capable team in the Navy, and quite frankly in the world doing this work. Proof of statement is the significant growth in solving very challenging problems that the team in Dahlgren is tackling. They have the ability and confidence to say yes to these kinds of projects because of the team’s capabilities.

This big team is working together to answer the questions that have not been answered yet about Directed Energy. And I know they will answer them, because they’re doing it already, every day.

You say that we’re on the cusp of great change in Directed Energy, can you explain? Where we are now with Directed Energy has been compared to, in Navy terms, the transition from a fleet powered by sails to steam power. This is big and when we look back at this time we’re going to see significant increases in systems that are being developed and employed.

What is Booz Allen’s role in driving that change? We advance the state of Directed Energy working side by side with our government clients on integrated project teams. We’re really trying to advance the understanding and acceptance of Directed Energy by lawmakers and by those outside the industry to encourage investment in the development of these capabilities.

Booz Allen is a thought leader in this space, and we’re committed to growing our expertise by pulling this very small community together to collaborate and exchange ideas. We host a Directed Energy summit every year with the goal to have all the stakeholders in the same room—engineers and scientists, military leaders, and lawmakers—where we examine the needs and priorities, and the potential of Directed Energy.

How do you know you’re having an impact? My impact is in enabling the success of the people I’m working with. I watch some of the successful trials and implementations of Directed Energy systems led by teams of Booz Allen engineers and scientists—and when they come back after long hard days and nights and they’ve been successful—knowing that I’m part of it is very satisfying.