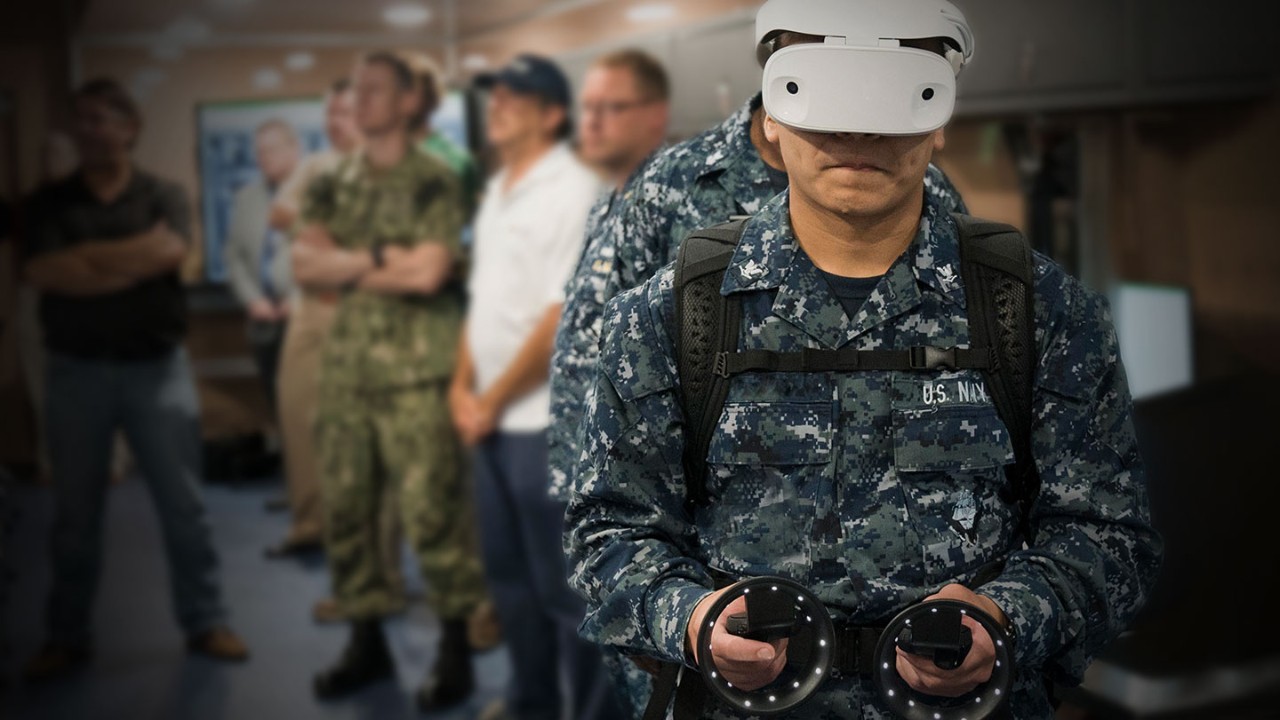 In the not-too-distant future, large unmanned Navy vehicles—both surface and undersea—may be regularly patrolling the waters of the South China Sea, equipped with sophisticated sensors, formidable weapon systems, and advanced analytics. As with any emerging military technology—particularly those with new, untested missions—much about how this will play out can’t be fully predicted.

How will potential adversaries like China respond to the large unmanned surface vehicles (USV) and unmanned undersea vehicles (UUV), and how will mission planning need to be altered as a result? Which tactics, techniques, and procedures (TTP) will prove successful, and which will need a reboot? How will the onboard analytics and other complex software need to be improved?

Changes to the large unmanned vehicles (UV) and their operations are likely to come fast, as the Navy learns what works and what doesn’t, and makes often rapid, iterative adjustments. But there’s a potential snag. With all this change, UV operators will continually be required to do things in new and different ways. Can the training keep up?

The Risks of Falling Behind

Conventional Navy schoolhouse training can give operators basic hands-on experience with the large UVs, but it will not be able to provide training updates as fast they’ll be needed. Sailors may have to wait weeks and even months for the latest schoolhouse training. That’s fine when new training is needed only infrequently. But that won’t be the case with the incorporation of large USVs and UUVs into the fleet. Critical updates in mission planning, TTP, software—and even hardware like sensors—will likely come far more often.

The Navy plans to train sailors on the large USVs and UUVs as they’re rolled out and tested, and so ideally, when the vehicles are first put into action, the operators will be up to date. But that may be the only time they will be. As the Navy quickly adapts the new USVs and UUVs to real-world conditions in the Pacific Rim, the sailors’ training could fall further and further behind.

There are several risks to such a growing lag in training. The Navy may not be able to take full advantage of increasingly sophisticated capabilities for the large USVs and UUVs— capabilities critically needed to keep ahead of the nation's adversaries. The training may be several generations behind new mission plans, capabilities, and payloads. We can’t count on adversaries having a similar training lag.

Navy decision makers—many of whom are already wary of these kinds of risks—may be reluctant to deploy the large USVs and UUVs if they feel the training is inadequate. This could significantly slow the Navy’s rollout and expansion of unmanned vehicles, at a time when the Navy has signaled it wants to move quickly as possible to counter emerging threats in the Pacific Rim.

The success of large USVs and UUVs in the Pacific Rim will depend largely on the ability of the training to keep pace with rapid operational and technological change. There is now an opportunity to achieve this by supplementing conventional training with training using augmented reality (AR) and virtual reality (VR).

With AR/VR, the training can be forward deployed—that is, on ships and submarines, and at remote military installations. Sailors won’t have to wait for visits to ports that might have the appropriate simulators and other trainers when training updates are needed. Using highly portable AR/VR goggles and heads-up displays, they can train at their current location, whether in port or at sea, gaining the “reps and sets” they need to become proficient with new mission plans, capabilities, payloads, and other changes.

Just as important, AR/VR training can be kept fully up to date, incorporating changes to UVs as they become available. One of the drawbacks of schoolhouses is that the trainers often lag operations—they may get new software and hardware months or even years after they’ve been introduced into the fleet. AR/VR software can be quickly updated, so that the training is kept current and relevant. Operators can even train on new UV software and hardware as it's being developed, by tapping into the digital models being built by system engineers and architects. That way, the operators are ready to go the day the changes take effect.

Forward-deployed AR/VR also offers much more flexibility than schoolhouse trainers. For example, the Navy might deploy a number of large UUVs with various software and hardware configurations, based on their missions. It is difficult for a single physical trainer to accommodate all those different configurations, so operators may learn how to operate only one of those UUV configurations. With AR/VR, the operators of each UUV could get customized training.

Combining that flexibility with onboard training could be crucial as the new USVs and UUVs are deployed in unpredictable situations. For example, if China responds in an unexpected way to the UVs, the Navy may need to revise the scenarios it is planning for. Training for those scenarios can’t wait for the schoolhouse. With AR/VR, forward-deployed UV operators can quickly begin training for any new scenarios.

Because the large USVs and UUVs are essentially emerging technologies with emerging missions, there will be a sharp learning curve for operators. It will be essential that forward UV teams share their lessons learned with one another. AR/VR makes it possible to aggregate this knowledge, by incorporating feedback from users into updated training, which is then pushed out to the operators. Revisions to the AR/VR training are typically placed on disk drives, which can then be delivered to the next port of call of the UV operators.

AR/VR training for large UVs does not remove the need for conventional schoolhouse training. That’s still important to give operators tactile experiences and to help them develop muscle memory. But once the large USVs and UUVs are incorporated into the Navy’s Pacific Rim operations, they will need to quickly and constantly adapt to change. Forward-deployed AR/VR training can help smooth the way.

Get all the articles in our free e-book, “Navy Solutions for Joint All-Domain Forces in the Pacific.” 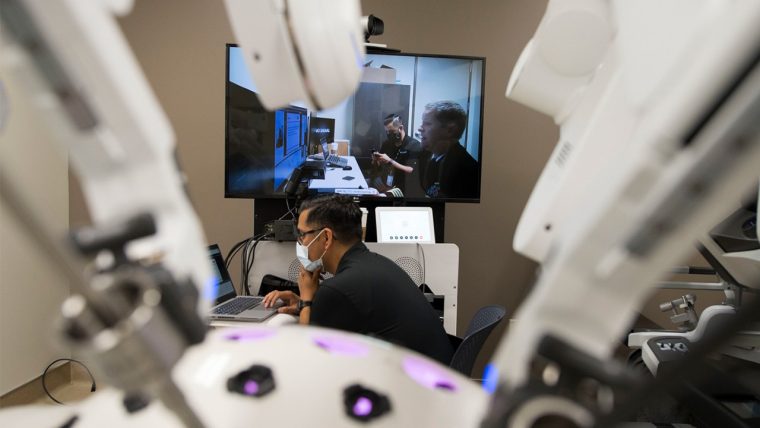 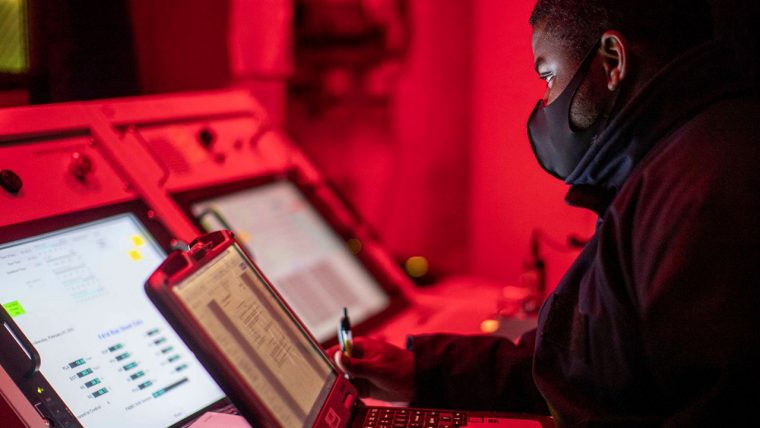 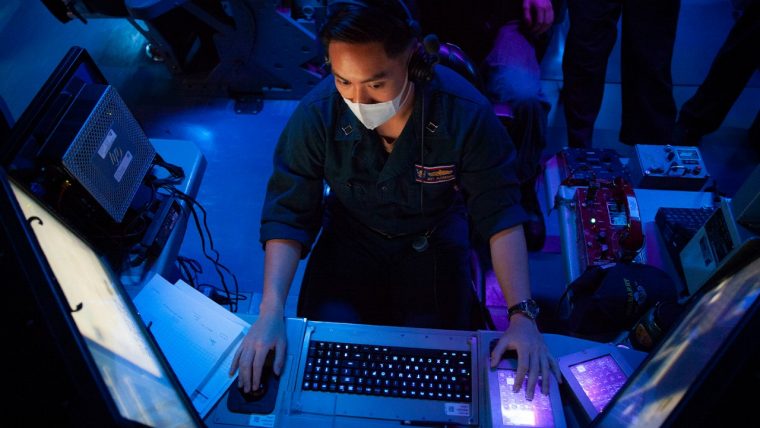 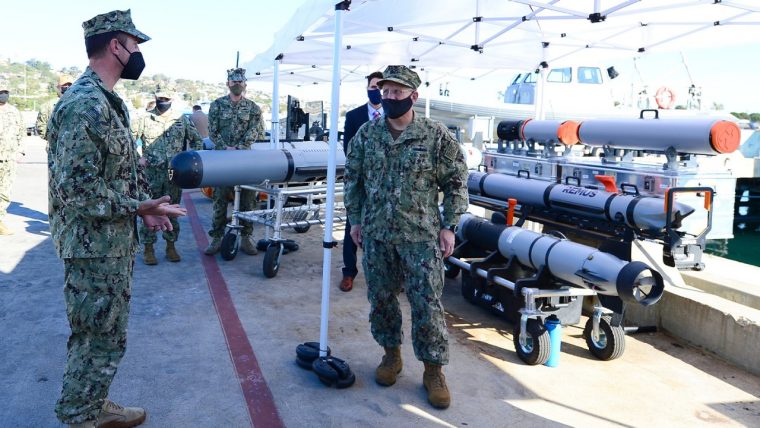 The Navy can unlock the power of digital engineering for unmanned maritime systems (UMS) in the Pacific. Read More