Acquiring for the Digital Battlespace 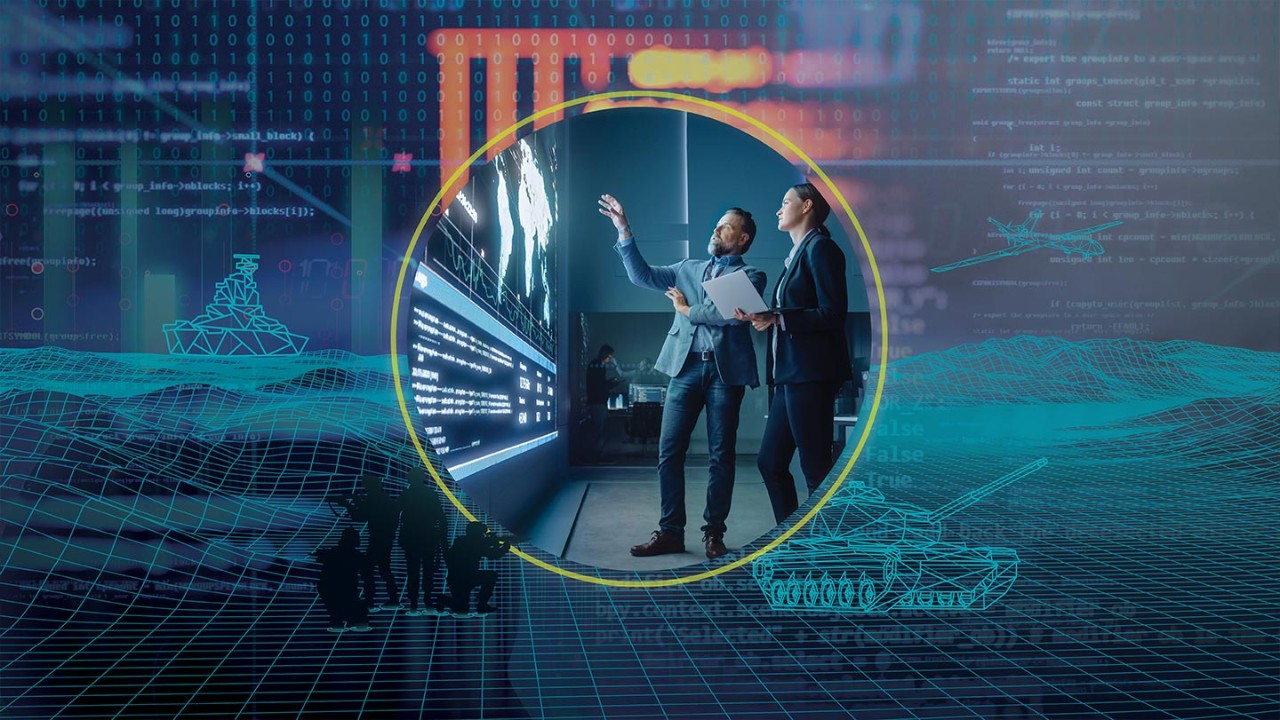 Maintaining a decisive advantage in today’s battlespace requires information dominance, data interoperability, technological agility, and, critically, an acquisition process designed to provide warfighters decisive capabilities that are interoperable, affordable, and flexible enough to keep pace with the threat. And it all needs to be done faster.

Unfortunately, the nation’s defense acquisition system was built in a different era, for a different type of war, and remains, at a high level, largely unchanged. In the past, the U.S. hardly needed to be technologically agile, because the nation had an unquestionable technological advantage over its closest rivals. If it took 10 years to take a new vehicle or capability from concept to fruition, that was fine—the lead was that comfortable. And there was no internet, no cyber threat, no data science, and no artificial intelligence (AI). With no digital realm to speak of, data architectures and interoperability could hardly be concerns. It really didn’t matter much that things were built and operated in isolation.

Obviously, things have changed. Even the pace of change itself has changed—accelerated exponentially—and while much has been done to maintain U.S. advantage, the acquisition process has lagged to such an extent that it is now in many ways an obstacle to growing and even to maintaining a decisive edge over adversaries.

Sources of defense-relevant information have exploded in number, with the proliferation of sensors across land, sea, air, and space domains supplying unfathomable amounts of data every second of every day. The modern battlespace and operating tempo of technologically advanced adversaries demand that we make sense of this information in near-real time and make it instantly available to warfighters and other mission operators.

Lt. Gen. Chris Bogdan, USAF (retired) a former acquisition executive, Program Executive Officer, and U.S. Air Force test pilot, and now an executive in Booz Allen’s aerospace business, offers this example. “The Air Force would love to have AI-powered sensor fusion in all of their aircraft so pilots and aircrew members can have superior situational and battlespace awareness to allow them to make the best real-time decisions. The aircrew wants pre-analyzed, relevant, fused multi-source sensor information from wherever they can get it. This can provide them the clearest, most accurate, real-time battlespace picture significantly enhancing mission safety and success.”

Overall, the Department of Defense's (DOD) acquisition system as it currently exists is not designed to meet such needs quickly and affordably. While initiatives like Joint All-Domain Command and Control (JADC2), the Air Force’s Advanced Battle Management System (ABMS), and similar efforts from the other services are taking steps to focus the acquisition system on improving information superiority and data interoperability, there is still a long way to go to adjust the acquisition system to deliver such capabilities.

Acquisitions: From Enabler to Obstacle and Back

Let’s back up a little and examine why the acquisition system is a poor fit for DOD’s—and the nation’s—current needs. In the modern battlespace, accurate and secure information needs to be available faster and, in more places, than ever before. Wherever the nation's warfighters execute their mission—remote mountains, contested airspace, deep beneath the sea, or on orbit—they need the right information from the most relevant sources at the right time to make well-informed decisions at critical moments to stay ahead of increasingly advanced adversaries.

To get them that information, data needs to cross multiple systems, starting from sensors to fusion and analysis processing, and then be distributed to decision makers, warfighters, and analysts on demand. A big part of making this possible is ensuring that data is organized into standardized schemas and that all the various systems in play are designed (or in the case of legacy systems modified) to be digitally interoperable now and in the future as new systems are incorporated, and old systems are removed, updated, or replaced.

To achieve this level of flexibility and interoperability two fundamental acquisition paradigms must be changed. First, new systems must be designed using open, modular, and scalable architectures. DOD can no longer afford to develop and field platforms, systems, and capabilities that are closed, proprietary, and unscalable. These vertically integrated, siloed systems will have marginal utility in today’s digital, data-driven, battlespace if they cannot easily “connect” with other systems. It also makes these systems incredibly expensive and time-consuming to modernize and upgrade as the threat, technology, and warfighter needs change.

“As new systems are developed, they need to be universally compatible with each other and future systems, and that means they need to be developed with open architectures,” says Joel Dillon, a U.S. Army veteran and executive in Booz Allen’s Army-facing business. “Working with open architectures means that when you replace one component of your system because it’s all you need or it’s all your current budget allows, you don’t then have to go back and redesign and retrofit your whole architecture so that this one new thing fits into it. With universally open architectures, it’s much more of a plug-and-play scenario, where you can add new capability incrementally and much more rapidly as needed,” he explains.

The second acquisition paradigm shift deals with system requirements. The conventional wisdom for acquisition program managers has been that requirements must remain stable throughout a system’s development because any requirement changes would result in cost and schedule overruns. Unfortunately, this practice would very often lead to systems, that when fielded, are already obsolete or less capable because the threat, technology, and warfighter’s needs outpaced the systems development and fielding. This would result in costly, time-consuming, and readiness-reducing modification and upgrade programs to keep the system combat relevant.

The acquisition community must recognize, accept, and plan for the fact that the requirements can and will change during development. Systems must be designed using shorter, quicker, iterative, and agile processes that can accommodate these inevitable requirements changes. The good news is that DOD has begun to recognize that through rapid prototyping, user feedback, and experimentation, coupled with modern engineering processes like DevSecOps, and digital and model-based systems engineering, they can design, develop, and field systems faster, less expensively, and most importantly with capabilities that can keep pace with the threat, technology, and user needs. The combination of designing scalable, open-architecture systems using rapid prototyping, experimentation, and modern engineering processes is becoming more common within DOD but is still far from the norm. This needs to change.

Big “A” Acquisition—Budgeting, Planning and Programming, and Requirements

Part of the reason why this new paradigm shift is slow to become the norm is rooted in three other strategic processes within DOD—budgeting, planning and programming, and top level-requirements setting, sometimes referred to as “Big A” acquisition. These processes all need to be adjusted to enable this new, more modern design and development process. To better understand the complexity of the problem, let’s take a closer look at each of these starting with the budget.

Defense budgets often struggle to roundly support both long-term visions that stretch beyond the Future Years Defense Plan that is often adjusted with each annual budgetary cycle, and short-term needs that change much more rapidly than the current budget cycles can keep up with. The services need more flexibility in how they spend the dollars appropriated, especially (though not exclusively) within research, development, test, and evaluation (RDT&E). The ability to move funds within a portfolio of programs is needed to enable the rapid prototyping, experimentation, and agile engineering processes of the future, and, while some reprogramming is possible today, more flexibility to do so in terms of amounts and across appropriation titles is needed.

The planning and programming process must also be modified to speed up the adoption of this new design and development paradigm. Strategic planners and programmers from the services and DOD should begin to divest those legacy systems that are less survivable and too costly to maintain and modernize in today’s battlespace. This downstream money should then be reinvested in more open and connected systems that can be fielded more rapidly and modernized more inexpensively.

Finally, the strategic requirements process must also undergo some changes. The Joint Requirements Oversight Council (JROC) should also encourage more early prototyping, experimentation, and user feedback before system-specific requirements are determined. This would increase the probability that once a system is fielded it meets the user’s needs.

The services and JROC should also not be in the business of validating lower tier requirements on a system-by-system basis—as these requirements will necessarily change during the new rapid design and development construct. Instead, they should be establishing top-level open architecture and interoperability requirements to ensure new systems are borne with the ability to contribute to the wider system-of-system networks, can be rapidly upgraded and modernized, and affordably sustained. They should also ensure that the Services do not duplicate capabilities but instead build flexible systems that can be tailored for unique Service needs.

For decades, DOD has established studies, commissions, and internal reviews to attempt to improve the acquisition system. This paper is not an attempt to solve such a complex challenge. Instead, we have illuminated how different stakeholders and paradigms might be adjusted to enable the designing and developing of systems that are “connected” and flexible enough to evolve at the same pace as threats, technology, and warfighter needs. Integrating new and legacy systems initiatives like ABMS and JADC2 will help the U.S. win in the digital battlespace; however, without changes to current acquisition approaches, we may not realize the potential of these new systems. A modernized acquisition system can—and must—be a critical enabler, and not a hindrance, to staying ahead of adversaries by providing the nation's warfighters with the best available capabilities and information.