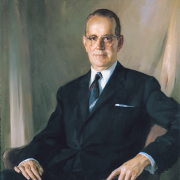 James Lane Allen was chairman of Booz Allen Hamilton from 1946 to 1970, a time of steady growth in the firm’s number of partners, staff, and geographic locations. He was named honorary chairman in 1970 and remained actively involved with the firm until his death in 1992.

Jim joined the firm, then called Edwin G. Booz Surveys, in 1929 and was named a partner in 1936. Focusing on business strategy, personnel, and organization studies, Jim’s early clients included Hart, Schaffner and Marx, Ditto Inc., and Chicago Title & Trust, among others.

In the early 1940s, Jim joined Ed Booz in conducting the firm’s landmark work for the U.S. Navy and Army leading up to World War II. After the war, he led Booz Allen to add the technical, scientific, and engineering dimension to its management consulting base that would, in time, become the firm’s largest and most successful business area.

“Jim passionately believed in client service and building long-term client relationships. He practiced and coined the term, 'the spirit of service.'”

Jim passionately believed in client service and building long-term client relationships. Under his leadership as a partner and then chairman, the firm’s longest client relationships flourished in both the commercial sector (S.C. Johnson, maker of Johnson Wax) and the government sector (the U.S. Navy). He was pictured on the cover of Business Week in April 1960, which wrote in its feature article about Booz Allen Hamilton, “By definition and design, this is an extraordinary operation.”

Jim practiced and coined the term, “the spirit of service.” He was a founding contributor to the Evans scholar program and a generous philanthropist to his alma mater, Northwestern University, where he endowed the James L. Allen Center at Northwestern’s Kellogg Graduate School of Management.

He earned a B.S. in economics from Northwestern University.