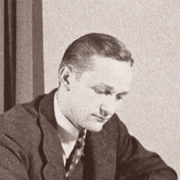 George Fry joined the firm in 1925, then called Edwin G. Booz Surveys, as Ed Booz’s first permanent full-time employee. He quickly became a leader in the firm and stayed in a senior leadership position until leaving Booz, Fry, Allen & Hamilton in 1942.

For nearly 20 years, George served as Ed Booz’s most senior partner and colleague, working for the firm’s most important clients including U.S. Gypsum, Montgomery Ward, and Container Corporation of America. He helped solidify Booz, Fry, Allen & Hamilton’s strong client base in the Midwest and was instrumental in founding the firm’s New York office.

“For nearly 20 years, George served as Ed Booz's most senior partner and colleague, working for the firm's most important clients.”

George felt the firm was better off focusing on commercial work, and was strongly opposed to its continuing support to the U.S. Navy. In 1942, he left Booz Allen and its government work behind and formed his own firm as Fry, Lawson and Co.