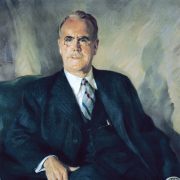 Edwin George Booz, a pioneer of the management consulting profession, founded Booz Allen Hamilton in 1914 in Chicago, originally under the name The Business Research Service. He led the firm as its chairman until 1946, and continued to work part-time for clients and to mentor the next generation of leaders until his death in 1951.

Ed’s first major client assignment was for the Illinois State Railroad, researching potential customer reaction to a rate increase. He also served several Illinois banks and the Minneapolis Journal newspaper in the firm’s early days before being drafted into the Army in 1917. Ed rose quickly in wartime from private to major, and returned to civilian life and his fledgling business in 1919.

He built the firm’s business and client base, serving Goodyear Tire, Addressograph Corp., General Mills, U.S. Gypsum, Montgomery Ward, and other major industrial and service companies with management consulting, organization, and market research services in the 1920s and 1930s.

“Ed published frequent articles about business practices, and articulated the values of character, professionalism, and leadership that continue to guide the firm that bears his name more than a century later.”

In 1940, as the tensions leading to World War II were heating up in Europe, then Secretary of the U.S. Navy Frank Knox hired Booz Allen to help the Navy double in size and streamline its operations. Ed and partner Jim Allen led the work to revamp Navy systems and services for effectiveness and efficiency.

In 1941, the U.S. Army asked Booz Allen to do similar restructuring work. Quoted in Fortune magazine in 1944 about the firm’s work in support of the war effort, Secretary Knox said he had never spent the government’s money more effectively.

Ed published frequent articles about business practices, and articulated the values of character, professionalism, and leadership that continue to guide the firm that bears his name more than a century later.

He received his bachelor’s and master’s degrees from Northwestern University.