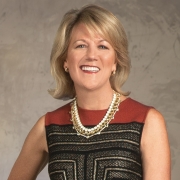 Gretchen McClain joined Booz Allen’s board in 2014 and serves as the chief executive officer of J.M. Huber Corporation, a family-owned business. Previously, she served as an operating executive for the Carlyle Group from 2019 to 2022. She was the founding president and CEO of Xylem Inc. from 2011, when it was formed and taken public from the spinoff of ITT Corporation’s water business, until 2013. She joined ITT in 2005 as the president of the company’s residential and commercial water business.

Earlier in her career, Gretchen held senior executive positions at Honeywell Aerospace, in the company’s Business, General Aviation, and Helicopters Electronics as well as the Engines, Systems, and Services divisions. Gretchen also spent 9 years with NASA serving as deputy associate administrator for space development, where she played a pivotal role in the successful development and launch of the International Space Station Program as chief director of the space station and deputy director for space flight.

Gretchen has a B.S. in mechanical engineering from the University of Utah.