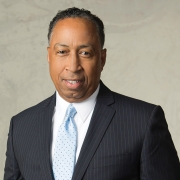 I joined Booz Allen after more than three decades in the United States Army. Throughout my military career serving in multiple command and leadership roles, Booz Allen and its people provided exceptional support to the organizations I was privileged to lead.

Known for being a values-based company that embraces the mission and its people, Booz Allen was an easy choice for my next chapter. Since joining the firm, I’m using my unique perspective and experience to inform and inspire my colleagues as we help bring our defense clients into the future.

Dennis Via is an executive vice president and leads firmwide corporate engagement in the Office of the CEO. He is a fellow for Defense Futures and a member of Booz Allen’s Defense Sector leadership team. Dennis is a retired U.S. Army four-star general and an expert in military readiness, information technology, cybersecurity, supply chain, and the U.S. defense industrial base enterprise.

Within our global defense business, he helps formulate the firm’s future business strategy for the defense market and contributes to growth across technology innovation, warfighter advancements, readiness and training, and security cooperation. As a defense fellow, he assists senior defense, intelligence, and homeland security clients in navigating today’s evolving global threat and budgetary environments.

During his 36-year military career, Dennis commanded at all levels from lieutenant to general, including several years as commanding general and deputy commanding general of the U.S. Army Materiel Command (AMC), the largest logistics command within the Department of Defense. AMC’s mission includes research and development of weapon systems, equipment and materiel readiness, worldwide logistics support, depot and arsenal manufacturing, and global supply chain distribution. As AMC’s deputy commander, he deployed to the CENTCOM Theater to oversee the drawdown and retrograde of equipment and materiel from Iraq at the conclusion of combat operations.

Dennis previously held multiple commander, signal, and chief information officer roles, working on everything from communications infrastructure and cybersecurity to global logistics and engineering. Receiving numerous honors and awards throughout his career, Dennis is the first and only commissioned Signal Corps officer in the U.S. Army’s 246-year history to achieve the rank of four-star general.

A native of Martinsville, Virginia, Dennis was commissioned in 1980 in the Signal Corps after completing his B.A. as a distinguished military graduate from Virginia State University. He holds a master’s degree in management from Boston University and is a graduate of the U.S. Army Command and General Staff College and the U.S. Army War College. He is a member of the Council on Foreign Relations, the Association of the United States Army (AUSA) Senior Fellow, AFCEA Executive Board, and serves on the nonprofit boards of Capital Partners for Education (CPE) and The Army Historical Foundation.

What inspires and motivates you? Leadership is my passion. I am inspired and motivated every day with the opportunity to make a positive impact and difference with those whom I am fortunate to work with, to help develop their leadership abilities, and to achieve their personal career ambitions and goals.


Why do you have the career you have? I was honored to serve our nation as an officer in the United States Army. After completing my military career, I was very pleased with the opportunity to join Booz Allen. My decision to join the firm was based on three reasons: first, the opportunity to begin the next chapter of my career with a values-based organization; second, Booz Allen’s genuine embrace of the client’s mission—what I refer to as the “gold standard”; and third, its people—the opportunity to work with some of the best and brightest people in this business.

What are a couple of highlights of your career? There are so many. Being stationed and living in Naples, Italy, early on in my career is one. Commanding the Signal Battalion in the 82nd Airborne Division and jumping out of airplanes—while in flight; standing up the Joint Task Force-Global Network Operations, the foundational organization for cyber defense operations for the Department of Defense and today’s U.S. Cyber Command. Serving on the Joint Chiefs of Staff in the Pentagon during the wars in Iraq and Afghanistan. Certainly, having the opportunity to lead a multibillion-dollar organization called the U.S. Army Materiel Command was a huge culminating career highlight. However, the single most important highlight in all these assignments, organizations, and locations were the special people and their families that my wife and I met and were privileged to lead and serve with along the way.

What was your first job? I’ve served in leadership positions since I was 22 years old. My first assignment was as a platoon leader at Fort Bragg, North Carolina, where I was responsible for leading, training, and the welfare of 40 soldiers who were from multiple cities and locations across the U.S.