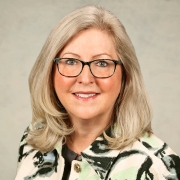 Prior to joining Booz Allen in 2018, Karen was responsible for developing strategic initiatives in support of major government programs at the Carnegie Mellon Software Engineering Institute. Her other previous roles include director of the Salient Cyber Security Center of Excellence, director of advanced programs and technology at Harris’ Crucial Security subsidiary, and program director of reconnaissance and surveillance operations at SAIC. In addition to those roles, Karen has also engaged in significant consulting activity as president of Crossroads management, a woman-owned consulting firm.

Karen began her career as a traveling-wave tube design engineer at Hughes Space and Communications. From there she went on to serve as an executive in sustainment information systems, and later as a business director with over $4 Billion of annual revenues on the B-2 bomber program at Northrop-Grumman.

She has served on the boards of directors for numerous organizations, including public libraries, the Armed Forces Communications and Electronics Association, and internationally renowned art museums in Boston and San Francisco.

Karen has a M.B.A. from Pepperdine University and a B.A. in Mathematics and Computer Science from the University of California at Santa Barbara. She is also a graduate of the Engineering Executive Management Program at Stanford University.