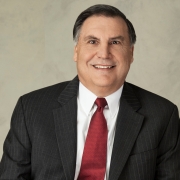 When an important decision must be made, the most important person in the room is the one who has the right answer. That’s something my father used to say when I was growing up. The lesson I took from it is that listening to a diversity of ideas from a diversity of people is the best way to get to the right solution.

Now, every day at Booz Allen, I’m honored to work with the best and brightest talent from a diversity of communities across the United States. Together, through our collective ingenuity, we give our military clients a technological advantage as they protect our country from adversaries of the free world. I am passionate about this daily opportunity to serve our clients as they serve our country in this very important mission.

Steve Soules leads Booz Allen’s Joint Combatant Commands account. Based in McLean, Virginia, Steve oversees programs employing a workforce of more than 3,200 in support of the Office of the Secretary of Defense (OSD), globally distributed combatant commands, and other joint and defense organizations and agencies.

Steve is a recognized leader in capability-based assessments and architecture analysis with more than 30 years of professional experience conducting operational research and analysis in the U.S. Navy, Joint Staff, and OSD. Throughout his career, he has designed automated tools for the architectural analysis of integrated systems and capabilities-based portfolios.

Before joining Booz Allen, Steve served as the first director of the Joint Command, Control, Communications, Computers, Intelligence, Surveillance, and Reconnaissance (C4ISR) Decision Support Center, an independent research and analysis center directly assisting the Vice Chairman of the Joint Chiefs of Staff and Assistant Secretary of Defense for Acquisition, Training, and Logistics in making investment decisions.

In the Navy, Steve served as a Naval Flight Officer operating in several E-2C Hawkeye squadrons, including a tour as Commanding Officer of Carrier Airborne Early Warning Squadron 114. While on active duty, he participated in several major deployments to the Pacific and Indian Oceans, including major military and combat operations.

Steve co-authored the book, Using Architectures for Research, Development, and Acquisition. It documents the processes and techniques used to help the Navy conduct a series of studies focused on improving time-critical targeting.

Steve is a member of the Military Operations Research Society and the Armed Forces Communications and Electronics Association.

What are the three biggest challenges facing the defense sector right now?  The three greatest challenges facing U.S. defense right now lie in our ability to modernize the country’s major defense organizations. More specifically, the Department of Defense (DoD) is seeking ways to: (1) modernize the business of managing itself with advanced technologies, (2) modernize the ability to operate defense forces in combat operations with key technologies, and (3) effectively and efficiently innovate with timely prototypes and solutions to do both of the above.

At Booz Allen, we are integrating our mission, technology, and innovation skills to meet these challenges with solutions that are operationally sound, technically superior, and cost effective.

What are the three biggest opportunities in defense right now? To maintain an advantage over our adversaries, the U.S. military is seeking to equip our forces with the most modern technologies, including and especially in the area of information warfare.

The three primary areas in which we are modernizing the U.S. military’s information warfare capabilities are as follows: (1) building a digital battle space, (2) providing open data architectures for the next generation data enterprise, and (3) protecting information and systems in the information and electronic warfare environment.

We are providing these solutions and services across mission-essential DoD organizations, in both the Defense Unclassified and Defense Classified operating areas.

How does your work change the world? Our work supporting the Joint Combatant Commands is changing both the way the DoD manages the business of defense and the way our forces fight in defense of our nation. We are changing the world by using the right new technologies to change the way that our forces operate, fight, and protect themselves as they risk their lives to protect the free world.