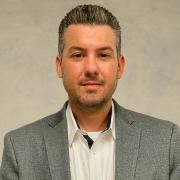 Matt Tarascio leads Booz Allen’s analytics and artificial intelligence (AI) business in support of the U.S. Department of Defense. In this role, he spearheads our efforts to accelerate integration of analytics, data science, and AI capabilities across defense missions, and guides strategy development to advance national defense.

As a member of the firm’s analytics and AI executive team, Matt drives efforts to identify and mature disruptive technologies, techniques, and methods through internal research and development programs. He also educates colleagues and clients on the appropriate, ethical use of such capabilities.

Matt earned a bachelor’s and a master’s degree in aerospace engineering from the Royal Melbourne Institute of Technology and the University of Maryland, respectively. Matt is also a recipient of the American Institute of Aeronautics and Astronautics’ Orville and Wilbur Wright Graduate Award, which recognizes significant research contributions to the field of aerospace engineering.