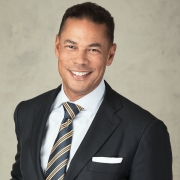 Lloyd joined Booz Allen in 1988 to provide systems engineering support to multiple Department of Defense (DOD) satellite programs. Between 1991 and 1995, he took a leave of absence to earn an M.B.A. from Harvard University, and then was an associate in Goldman Sachs’ investment banking division.

In 1995, he returned to Booz Allen as a member of the strategy and organization team where he focused on DOD clients, specifically the Navy/Marine Corps, Army, and Office of the Secretary of Defense. Among his many leadership roles since then, Lloyd led the firm’s Strategy and Organization practice supporting both international and domestic commercial and public sector clients.

Lloyd is a board member for Moody’s Corporation and GE HealthCare and a member of the Washington Economics Club. He is a trustee at the University of Pennsylvania and serves on the Board of Advisors for the School of Engineering and Applied Science.

Lloyd holds a B.S. in electrical engineering from the University of Pennsylvania and an M.B.A. from Harvard University. He received the Black Engineer of the Year Award (BEYA) in 2011 and was the winner of the BEYA organization’s Professional Leadership in Industry award in 2010.