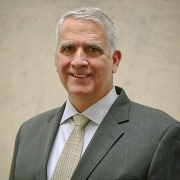 Jon entered the Army as an enlisted soldier in 1976. After a 3-year tour, he earned a B.S. and a B.B.A. and was commissioned as a second lieutenant. He served in a number of command and leadership positions over the course of his military career including:

Jon has a B.S. in English and a B.B.A. in operations research and systems analysis from Eastern Michigan University. He also holds three master’s degrees, in strategy from the U.S. Army War College, telecommunications from University of Colorado, and human resource management from Central Michigan University.