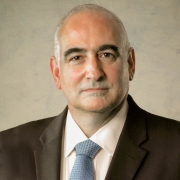 I’m passionate about all things space, including satellite development, ground system development, and mission operations. Helping to lead the amazing Booz Allen team as we continue to support the nation’s space efforts across the Intelligence Community and the Department of Defense is very exciting.

Frank Calvelli is a senior leader in Booz Allen’s national security program. He works closely with teams across the firm to build and strengthen client relationships and drive strategic growth initiatives throughout the space, intelligence, and defense communities. He is an expert in satellite and ground system acquisition, program management, and systems engineering.

Prior to joining Booz Allen, Frank served for 8 years as the principal deputy director of the National Reconnaissance Office, where he was responsible for the day-to-day management of the agency. In this role, he oversaw a large portfolio of complex and highly technical programs that included satellite and ground development, mission operations, and facilities.

He holds a bachelor’s degree in computer science from the State University of New York at Potsdam and an M.B.A. from Loyola University Maryland.

What makes you excited to come to work every day? The mission and the people. I’m passionate about all things related to the space mission, including satellites, ground systems, and mission operations. But the greatest strength of any organization is its people. I really enjoy helping and supporting people to grow in their careers and drive the mission forward.

How do you inspire your teams to do excellent work, and how do they inspire you? It’s important to trust and delegate—let the team do their jobs. At the same time, a leader should always maintain direct communication and provide continual feedback to the team. I’m inspired when my teams are successful—when they execute to plan by meeting their schedule, cost, and technical requirements.

What are the most pressing needs in the space domain today, and how can Booz Allen help meet them? We need to stay vigilant against threats to our space systems from other countries by improving space domain awareness and maintaining strong cyber protections. We also need to eliminate slow and inefficient large-scale software development efforts across the industry. Switching to smaller, faster, and more agile development programs will help us meet the need for shorter development timelines. Applying big data analytics, artificial intelligence, and machine learning to the space domain will allow us to create systems and programs that are more secure and cost-efficient than before.