Booz Allen CFO Lloyd Howell: Why It Pays to Ask for Help

Leaning on leadership for advice and education

Lloyd Howell boasts more than 30 years of client-facing work at Booz Allen—but in 2016 when leadership tapped him to apply his skills to the position of chief financial officer (CFO), he chose not to tackle the challenge alone. Instead, he sought advice from other CFOs—and recently shared highlights from his leadership journey at the high-performing consulting and technology firm with The Wall Street Journal.

“I think the best education and learning process is to learn from others,” said Lloyd. “Finance is a language. To be good, I think you need to understand and learn the language.”

Even with decades of experience, a Harvard M.B.A. and the support of a strong professional finance team, to serve as the CFO of a global, publicly-traded corporation on a strong growth trajectory was a daunting prospect, with great challenges and responsibilities, he said.

“You are really in control of a small percentage of what happens and yet you are held accountable for 100 percent of what happens or doesn’t happen,” Lloyd told The Wall Street Journal. “I didn’t want to fail or let my colleagues down, so I needed to learn a lot; I needed to get up that learning curve.”

To do so, he enlisted colleagues to help him reach out to other CFOs, creating his own informal group of advisors and tutors.

“I’ve always reached out to colleagues, mentors, and coaches for advice and counsel,” Lloyd said. “This was very much in keeping with what I had always done. I think the best education and learning process is to learn from others. And I, with the help of colleagues, got in touch with other CFOs. I’d say it was a core of five individuals who are representative of three to four different industries.”

Seeking help is a strength, not a weakness

“Observing folks over the years who try to fake it until they make it—eventually they are found out,” Lloyd said to The Wall Street Journal. “I think there’s nothing wrong with admitting when you don’t know something. More times than not, folks are very open and helpful.

“I definitely feel like [decades running parts of Booz Allen’s client-facing business] has made me effective in this [CFO] role, in large part because I can communicate and articulate needs as I would have wanted to hear it in my previous roles. I’ve been in the shoes of my internal clients for a long time and appreciate the pressures they are under and the performance they are trying to achieve and how to help them as best I can to achieve that performance,” Lloyd said in his interview.

“I think the expectations on people who were in the CFO role [were] probably more financial than anything else. What I have experienced, and also what I’ve seen others in different industries, is more a blend of business strategy and its ramifications on the financial strategy. I think today that is a pretty important requirement for CFOs. I haven’t met many CFOs who are so narrow on just cranking the numbers.” 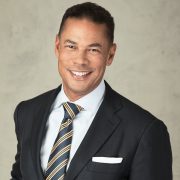