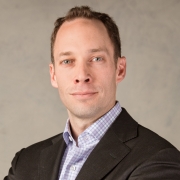 Nicholas Veasey is Vice President of Investor Relations at Booz Allen. He is responsible for engagement with current and potential investors, equity analysts, as well as trading desks and exchanges. He also works closely with the firm’s chief financial officer and partners with leadership to evaluate capital allocation and deployment strategies.

Prior to Booz Allen, Nick worked for Deutsche Bank in the Industrials sector as an investment banker, executing debt, equity, and merger transactions for large, corporate clients. Previously, Nick served as a Marine Reconnaissance Platoon Commander with multiple deployments to the Middle East following his graduation from the United States Naval Academy in 2002, where he earned a B.S. in economics. Additionally, Nick received an M.B.A. and M.S. in public policy from Georgetown University.