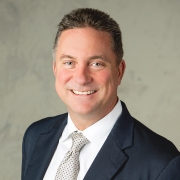 The U.S. Government is the world's largest buyer of goods and services—but they write the rules and if you’re going to sell to them you have to comply.

Those rules are challenging and complex, but I get a sense of accomplishment by navigating through them, from helping the government achieve its goals, and, in the defense contracting realm, making sure our warfighters have overwhelming technological advantages.

I don’t want it to be a fair fight, and sometimes that alone prevents the fight from happening.

Prior to joining Booz Allen, Mark served as the director of government finance at Rolls-Royce Defense North America in Indianapolis, Indiana. His previous work, serving as financial controller at leading aerospace companies Cobham, Parker Hannifin, and Textron Defense Systems, took him to various locations in the U.S., the United Kingdom, and France.

He regularly speaks at government contracting seminars, and is an active member of the National Defense Industrial Association’s Procurement Contract Finance Committee and Financial Executives International’s Committee on Government Business. He formerly served as chairman of the Aerospace Industries Association’s Cost Principles Committee.

What inspires and motivates Mark?

We help them accomplish what they need to as part of the standard federal contracting process.

What makes you excited to come to work in the morning? I’ve been doing this for 30 years and I’m still always learning something new. Federal regulations are complex. They change and you have to keep on top of that. It’s nice to help guide the company through these complex processes. There is a lot of money at stake, so you know your team makes a valuable contribution.

I also get excited about supporting our warfighters, getting good value for taxpayers, and accomplishing the goals of our shareholders.

Why do you have the career you have? I started my career in investments, but when the stock market crashed in 1987 a lot of my peers and I had to get out of that line of work.

I was in Southern California and the major industry hiring there was defense. I joined a defense aerospace business as a financial analyst and moved into progressively more challenging roles at several different companies.

I like to say that I’m half accountant, half lawyer because all the regulations are based in law. Applying regulations to financial systems to keep them compliant has always been interesting to me.

What was your very first job? Lifeguarding in Southern California.  I was a lifeguard, swimming instructor, and swim coach.

I credit some of my ability to guide auditors through audits—to explain our costs—back to my days as a swimming instructor. That was a teaching role, and part of what I do now, in explaining things, is teach.

What advice would you give a new boss? Coach your folks.

Explain what you’re trying to do and solicit solutions from your team. You may not have the best or only solution to a problem. When your folks are part of the decision-making process, they’ll be more emotionally engaged in any assignment they work on.

What are a few keys to successfully managing and motivating people? Stay positive. When you’re dealing with regulations, audits, and timelines you don’t control, the process can overwhelm you.

But if you explain the steps involved, what might happen, and what you’re trying to accomplish, that should help the team stay motivated.

What motivates you? Solving problems that take time and strategy. Anticipating what moves might need to be made. Planning them. Checking in on their success and driving them to completion.

Also, working with people. My job is based in numbers and regulations, but it’s all interpreted and worked by people.

What are some of the biggest opportunities in federal contracting right now?  Acquisition reform in the National Defense Authorization Act might make the contracting process more efficient and less costly.

What’s been your biggest accomplishment so far? Saving a company division from closure after 9/11. I was asked to help stabilize it when the post-9/11 drop in the aviation market significantly decreased its sales volume. Headquarters considered closing it down.

We received authority to grow the company through an acquisition, which enabled us to ride out the market’s low point. When the market started to go up, the division became successful again. We couldn’t save all the jobs, but we saved a majority of them.

What’s something not many people know about you? I’m a fairly good cook.

My grandfather cooked in the merchant marines during WWII. When he came out he opened a restaurant called Vern’s Cafe in Topeka, Kansas, right next to the state capitol. He owned it through the late 1970s.

I picked up techniques and a little love for cooking from my grandfather.

What’s your strongest character trait? I’m calming and logical. I think through a process rather than reacting to it.

Isaac Asimov’s The Foundation Trilogy is a good example.