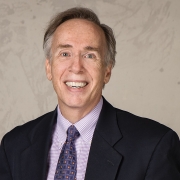 James joined Booz Allen as the firm became publicly traded, and has led the media relations team through a transformation that emphasizes impactful storytelling through diverse communications channels. In addition, he has had experience leading Booz Allen’s nationwide community partnership and corporate philanthropy programs, including corporate giving and volunteer programs.

Before joining the firm, he was a corporate spokesperson for Sprint for 13 years, managing external and internal communications for many of the company’s highest priority issues, including strategy and execution for financial communications in support of the chief financial officer, as well as two multi-billion-dollar merger activities and communications for its government sales division. He previously was vice president for Federal City Communications, a boutique aerospace and defense public relations firm. Before that, he was a reporter for the Orlando Sentinel, covering nearly 30 space shuttle missions from Cape Canaveral and the investigation of the Challenger accident, and was a reporter for the Clearwater, Florida, Sun.