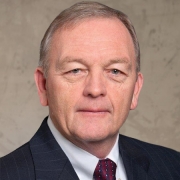 Mike joined Booz Allen in 2013. Prior to coming to the firm, he supported the defense and intelligence communities as director of customer operations and vice president for business development at L3-Titan, and as vice president at ManTech International. From 2008 to 2011, he was the USSOCOM and U.S. Central Command account manager at SAIC. Mike was director of account management for the national security sector at SAIC/Leidos from 2011 to 2013.

Mike served in multiple command and staff positions over 27 years in the U.S. Army, including service with USSOCOM, U.S. Atlantic Command, U.S. Army Special Operations Command, the 75th Ranger Regiment, and the Joint Readiness Training Center. He is a graduate of the University of Central Arkansas and has a master’s degree in national security and strategic studies from the U.S. Naval War College.