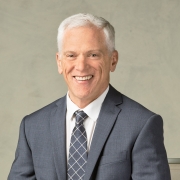 Prior to Booz Allen, Bill had a 19-year career at Boeing (formerly part of Hughes Space and Communications Company) designing, building, integrating, and testing satellite systems for NASA and DOD missions, including the NASA/JPL Magellan spacecraft that mapped the surface of Venus with a synthetic aperture radar (SAR). His last role at Boeing was managing a team of system engineers in the DOD, intelligence, and commercial markets for projects including TSAT and Space Based Radar (SBR).