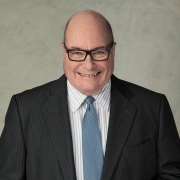 Having spent most of my 38 years in the defense industry, I understand our clients' most challenging problems. From exploring new technologies to determining how to best bring those advancements to the forces, I help deliver solutions that enable our clients to respond to conflict in an increasingly complex world.

Our folks have a tremendous commitment to client service, and to making sure the client is successful in their mission.

Brian has extensive management experience in aerospace and defense programs including systems engineering, software development, large-scale command and control systems, networks and communications systems, modeling and simulation, aircraft integration and modification, weapons systems, and intelligence, surveillance, and reconnaissance systems. This experience spans the U.S. and international markets, and involves all lifecycle phases (from concept development through production and logistics support).

He joined our firm in 2011 from Raytheon where he was a vice president and general manager of the integrated communications systems business unit.  In more than 30 years at Raytheon, Brian held a wide range of technical and executive leadership roles including the chief executive of Raytheon Systems Limited and chairman of the board of Raytheon Thales Systems.

He holds a B.A. in mathematics from Brandeis University and an M.S. in computer engineering from the University of Lowell.

Why did you join Booz Allen? We spent a long time making sure we were right for each other—we probably interviewed over an 8-to-10-month period. Ultimately, it was the quality of the people and the culture. I talked with probably 20 to 25 different partners over that period of time and a few things struck me. They were all different in personality and style, but they all described the culture pretty much the same. I was impressed with how much time we put in to making sure we have robust assessments of people. If your main product is your people, making sure your people are the best is a good way to make sure you’re successful. I was impressed with that.

What do you see as your strongest asset or attribute? I suspect it is my experience, which matters for perspective and to understand risk. Over the years, I developed pretty highly refined skills for competing and winning on very large contracts. We’ve won literally billions of dollars of large contract wins in the Army, and I’d like to think that’s because I’ve worked with the folks here and passed on some of the techniques and ideas on how to compete differently and more effectively.

What advice do you offer to people who are looking to take on leadership positions? I can’t claim this is an original thought, but the first thing is to do your job. If you’ve got a job to do, don’t have your eyes on the next job. Do your job the best you can do. Be the best you can be. Take care of your people. Take care of your clients. Usually, if you’re really focused on that, good things tend to happen.

What are your tips for managing and motivating people? Try to make it as fun as it can be. Delegate and trust people. If you surround yourself with really good people and you turn them loose with the right guidance and you pass on some ideas and develop them to be better, I find the folks on my team have taken the mantle and run with it.

What is something about you that others might not know? I led my high school chess team to state championships. Probably most people don’t know that about me, although they know I like to play chess and bridge. I like to play games.