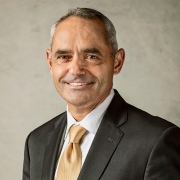 Since joining the firm, Jerry has led response efforts on several major ransomware attacks and helped Fortune 500 clients understand and address emerging threats. He also leads our outreach to insurance panels and law firms and works with capability leaders across the firm to deliver the broadest and deepest set of solutions to commercial clients.

Prior to joining Booz Allen, Jerry was a managing director with Ankura Consulting, where he oversaw incident response investigations, assessments, and technical services for clients ranging from large corporations to small, privately held companies. He also served as an outsourced chief information security officer (CISO) for several major corporations.

Jerry retired from the Federal Bureau of Investigation (FBI) after a 24-year career as a special agent and executive manager. In his last assignment, he served as chief of the technical operations section for the FBI cyber division, where he managed the national cyber incident response team and developed threat-agnostic tools to counter cyber adversaries. He also led the FBI investigation into the 2014 cyber attack against Sony Pictures Entertainment.

Jerry earned a B.S. in civil engineering from the Virginia Military Institute and is a former Marine Corps officer.